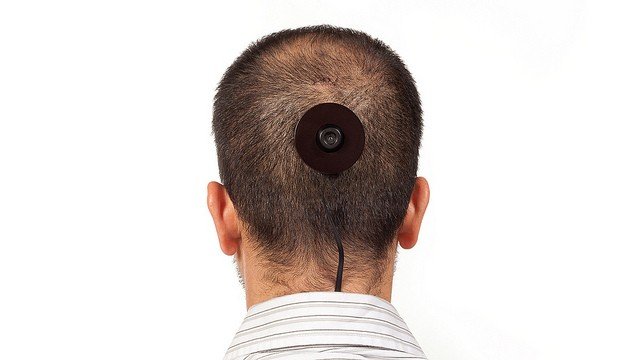 [dropcap style=”font-size: 52px; color: #efd77d;”]C[/dropcap]yborg Cinema – the performance art of Wafaa Bilal and Andrew Milne: A cyborg is a person with both natural and artificial systems. At the root of the concept of the ‘cyborg’ within art practices traditionally is an exploration of the boundary between the human and the machine, as it relates to overarching ‘human-specific’ concepts of self-determination, humanity and morality. This program pairs the work of Wafaa Bilal and Andrew Milne as they use the living performance of their bodies connected to technology to pose universal questions that underlie the notion of ‘cyborg.’

Read the essay “The Machine as an Act of Peace,” by Cecilia Araneda

[dropcap style=”font-size: 52px; color: #efd77d;”]I[/dropcap] am nothing if not a storyteller. My work to date has been concerned with the communication of public and private information to an audience so that it may be retold, distributed. The stories I tell are political dramas, which unfold through my past experience and into the present where they interact with the currency of media as the dialectic of aesthetic pleasure and pain. Through various layers of distribution and interpretation, pictures are drawn using interactive models established through the stories’ (technological) framework where they are revealed and shared. With an audience locked in participation, my story may be retold. The 3rdi is just such a platform for the telling and retelling of another story. A camera temporarily implanted on the back of my head, it spontaneously and objectively captures the images – one per minute – that make up my daily life, and transmits them to a website for public consumption.

During my journey from Iraq to Saudi Arabia, on to Kuwait and then the U.S., I left many people and places behind. The images I have of this journey are inevitably ephemeral, held as they are in my own memory. Many times while I was in transit and chaos the images failed to fully register, I did not have the time to absorb them. Now, in hindsight, I wish I could have recorded these images so that I could look back on them, to have them serve as a reminder and record of all the places I was forced to leave behind and may never see again.

The 3rdi arises from a need to objectively capture my past as it slips behind me from a non-confrontational point of view. It is anti-photography, decoded, and will capture images that are denoted rather than connoted, a technological-biological image. This will be accomplished by the complete removal of my hand and eye from the photographic process, circumventing the traditional conventions of traditional photography or a disruption in the photographic program.

[dropcap style=”font-size: 52px; color: #efd77d;”]T[/dropcap]his performance will use an Electroencephalography (EEG) Machine to electrically measure a performer’s neural activity and translate it in to video projection. The work began as a variation of Alvin Lucier’s 1964 work ‘Music for Solo performer’ in which Lucier translates his thoughts into sound via mechanical instruments. The performance has become an examination of the mechanization of memory and the dissolution of place. The thoughts of the performer are able to control (fly) google maps through the EEG and allow him to navigate images and memories from recorded stories told by his father. Through these stories an experimental narrative of migration emerges that crosses continents and generations.